Home » Feast Your Eyes on Holiday Dishes Around the World

Feast Your Eyes on Holiday Dishes Around the World 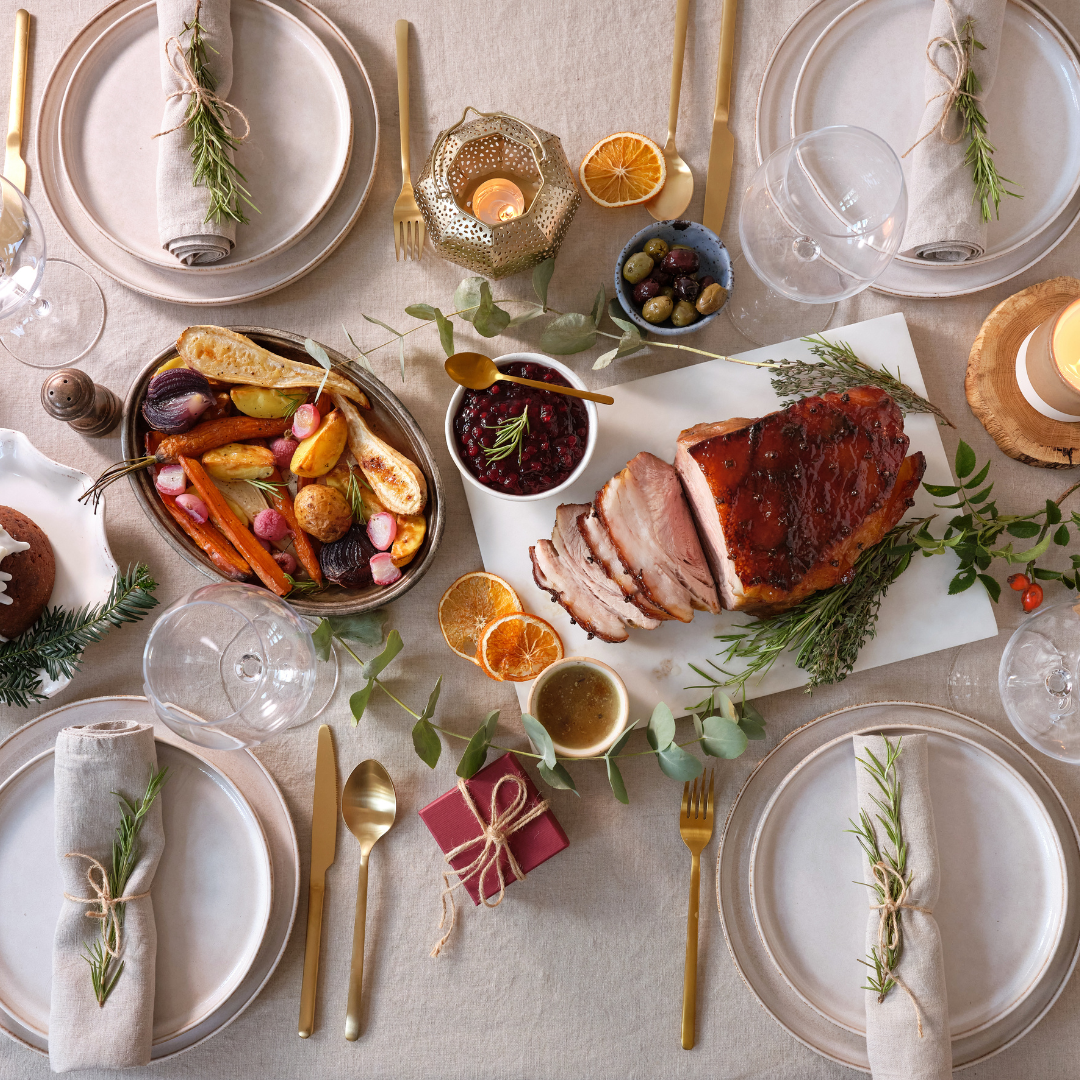 What would Christmas be without the taste of turkey and the smell of gingerbread baking in the oven? Or was that the taste of oysters and the smell of roasting chestnuts? Work up an appetite and get inspired with this tour of Christmas and New Year’s food from around the world. And if you’re looking for something a little different this year, why not incorporate some of these foods into your own holiday dinner or have them as treats throughout the holiday season?

U.S. and Canada: Turkey and Sides

In the United States and Canada, the Christmas table is built around roast turkey or duck — the latter being especially popular in New England and on the East Coast. Honey-glazed ham and roast beef are other favorites. All are served with a variety of side dishes.

Mac and cheese, rice and peas, mashed potatoes, cornbread, and baked sweet potatoes with marshmallows are staples. Alternatives are potatoes, vegetables, various kinds of gravy and the mandatory (or controversial, depending on whom you ask) cranberry sauce. Many families also add international dishes from their own traditions or incorporate favorite adopted foods.

The main Christmas meal in the U.K. consists of stuffed fowl — usually turkey, goose or duck — accompanied by bacon, potatoes with other vegetables, Brussels sprouts, gravy and cranberry sauce.

Of course, no meal would be complete without dessert. Mince pie, containing a dried fruit mix known as mincemeat, is a mainstay. The Christmas cake is a fruitcake soaked in whiskey or brandy, often topped with an almond glaze and embellished with edible and inedible decor.

Brandy and other liquors are also added to another dessert, Christmas pudding, which is served with a brandy butter.

French tables on Christmas and New Year’s Eve feature foie gras, oysters, snails and salmon. The main course is turkey with chestnuts. Dessert is a bûche de Noël, thin spongecake rolled up and frosted to look like a yule log.

The French also celebrate Epiphany (Jan. 6), the day when the Magi brought gifts to baby Jesus. The main dish on this holiday is galette des rois (galette of kings), a cake made of puff pastry and almond cream, with a figurine hidden inside. It is usually eaten with friends or colleagues, and the person who finds the surprise becomes the king or queen for the day. The cake kit is often sold along with a paper crown for the winner.

Spain: Seafood and Nougat
In Spain, the Christmas table is dominated by seafood and turrón, a nougat made of honey, sugar, egg whites and nuts, which is served in small pieces. Spaniards also celebrate Epiphany with their own version of king cake, roscón de reyes (ring of kings).

Italy: Sweet Yeast Breads
Almost every region of Italy has its own special recipes for Christmas. In the north, there’s pasta frolla (shortcrust pastry), pictured. In the south, it might be struffoli (fried dough balls). The sweet breads known as panettone and pandoro, however, are staples throughout the country.Some favorite main dishes for Christmas dinner are tortellini in brodo (tortellini in broth) and bollito (boiled beef). Cotechino e lenticchie (pork sausage with lentils) is a northern favorite. In Emilia-Romagna, the province of Bologna, passatelli (noodles made of breadcrumbs) are a local Christmas delicacy.

The German Christmas dinner menu varies from family to family and could be duck or fondue or raclette. According to our German colleagues, even simple sausage and potato salad can be the main course on Christmas Eve — no one dish stands out as the dinner staple.

Instead, it’s the baked goods that are truly emblematic of the holiday season in Germany. Noteworthy are Christstollen (fruitcake, often with a marzipan filling), various Christmas cookies known collectively as Weihnachtsplätzchen, and a soft gingerbread called Lebkuchen — some say the famous variety from Nuremberg is the best.

Denmark and Sweden: Potatoes, Pancakes and Pudding With a Surprise

The traditional Danish Christmas Eve menu includes roast duck or roast pork with a garnish of hot pickled red cabbage, white boiled potatoes, and potatoes browned in butter and sugar served with gravy on the side.

A beloved Danish December treat is aebleskiver (apple slices), a dish of small pancake puffs served with icing sugar and marmalade on the side. Traditionally, a slice of apple was put into each pancake before baking, hence the name.

Dessert is risalamande, a cold rice pudding served in a large bowl with slices of almonds, vanilla and hot cherry sauce. A single whole almond is hidden somewhere inside, and the person who finds it gets a special gift.

Across the bridge, the Swedes also like to have a hearty Christmas dinner of meatballs, pickled herring, Västerbotten cheese, potatoes, a kind of cracker called knäckebröd, beet root salad and sausage.

Finland: Long Live the Casserole
Finnish Christmas food traditions include a rutabaga, rice or potato casserole, salad with whipped cream, and lots of fish and ham. The casserole can be slow-cooked in an oven at home or bought ready-made. As in other Scandinavian countries, Finns also eat rice pudding with a hidden surprise.

Traditional winter holiday dishes in Bulgaria are cabbage rolls and banitsa, a large pastry filled with sirene (brined cheese). As with many festive pastries, banitsa recipes are often closely guarded family secrets with one thing in common: On Christmas, Bulgarians put lucky charms or pieces of paper with blessings for good health, love, a car or any other wishes into the dough. Some people put in coins as a blessing for financial well-being, and bake these in as well. All lucky additives are wrapped in foil so that they can survive the baking process and be spotted easily.

Russians love to celebrate the new year with family or friends around a table laid with festive snacks. The main culinary draw, without which the holiday would not be the same, is Olivier salad. The basic recipe involves potatoes, eggs, meat and cucumbers or pickles, but from there, each family has its own twist. People can argue for hours over whether to use mayonnaise (homemade or store-bought) or sour cream, sausage or boiled chicken or meat and pickles or fresh cucumbers, and whether to add grated green apple, carrots or peas. This is the real symbol of Russian New Year’s celebrations, prepared in such quantities that families eat the leftovers for the rest of the week.

The salad was invented by Lucien Olivier, who was head chef of the Hermitage restaurant in Moscow in the 1860s. At the time, the base of eggs and potatoes was augmented with delicacies like partridge, hazel grouse, calf’s tongue, crayfish, black caviar, capers, pickles and truffles. The recipe was simplified in Soviet times: The fancy meats were replaced with sausage or boiled meat, pickles filled in for capers, and green peas were added.

Another popular salad is nicknamed “herring under a fur coat.” It consists of pieces of herring layered in onions, potatoes, carrots and beets, each covered in mayonnaise.

Other mainstays are caviar and slices of red fish. Some families prefer open-face sandwiches with butter and caviar; others stuff the caviar into cooked egg whites. Kholodetz (meat in aspic), served in a cold broth and with horseradish or mustard, is another favorite. It is usually made of pig’s legs and ears, and it takes at least six hours to prepare.

Another item that appears without fail on New Year’s tables is the tangerine. In Soviet times, Abkhaz tangerines, which ripen by December, were the main fruit served on New Year’s. For many Russians, the New Year holiday is not the same without the scents of tangerine and fir.

Japan: Strawberries, Soba and Rice Cake
In Japan, the period around New Year’s is called Nenmatsu Nenshi. It is one of the most important holidays of the year. Christmas traditions are also popular but largely superficial, most visible in the decor of public places. As for food, cake made of fresh strawberries is often enjoyed around this time.On New Year’s Eve, the Japanese eat toshikoshi soba. This tradition originated during the Tokugawa Shogunate (that is, between the 17th and the mid-19th centuries). On New Year’s, they also drink a special sake called toso.

Another traditional food that is special to Japan is kagami mochi, a kind of plump, rounded cake made from rice harvested in the previous autumn. This is a decorative glass version, but people make real kagami mochi as well. The mochi made around the end of the year are kept in the home until Jan. 11 or so — the exact date varies throughout the country.

International foodies certainly can get behind the tradition of osechi ryori, a set of traditional New Year’s dishes prepared in advance so that the chef of the house doesn’t have to cook for the first three days of the year. The foods often are bought already made.

Having been a British colony, Singapore learned to celebrate Christmas the English way — despite the tropical weather. Traditional holiday fare such as roast turkey with trimmings has taken on uniquely Singaporean flavors as households began choosing takeout dishes (and as chefs rose to the challenge). This soy-braised turkey served with toasted spiced almonds and homemade chili sauce would be perfect served with pumpkin rice or egg noodles. It’s made in the Cantonese style, braised and slow-cooked with traditional Asian aromatics such as cinnamon, clove, star anise, and dark and light soy sauces. Other Singaporean turkey twists throughout the years have been chicken rice-stuffed turkey and curry-spiced turkey.

For dessert, another Western tradition — the log cake — also takes on a tropical twist. The sponge and filling flavors range from mango to durian.

In Australia and New Zealand, Christmas is in the summer. This is reflected in the cuisine, with light and fresh dishes such as grilled fish or prawns and salad dominating the holiday table. Pomegranates are also popular at Christmas, and fresh cherries are a special holiday treat.

Pavlova, made of meringue, whipped cream and fresh fruit, is popular on Christmas. Australia and New Zealand are still fighting over who gets the credit for inventing this beloved dessert, named after Russian ballerina Anna Pavlova.

The Seychelles: Complete Fusion
Christmas food in the Seychelles is all about fusion. Grilled fish — usually, the biggest red snapper at the market — is a perennial favorite, but Christmas tables are also filled with a mixture of foods from different cultures: curry, chow mein, salad, barbecue, lasagna and rice.
Back To Home Ideas

Follow us on social media and our blog for the latest real estate news, photos, and opportunities in Southwest Florida.

Check out our blog!

Celebrating Linda Sandlin's 40th Anniversary as a Real Estate Professional This year marks a significant milestone in the career of Linda Sandlin, co-founder of the Sand...

We are here to answer any of your questions!
Please reach out to us via email at MikeO(at)MarcoRealtySource(dotted)com or call us at 239.642.4450.